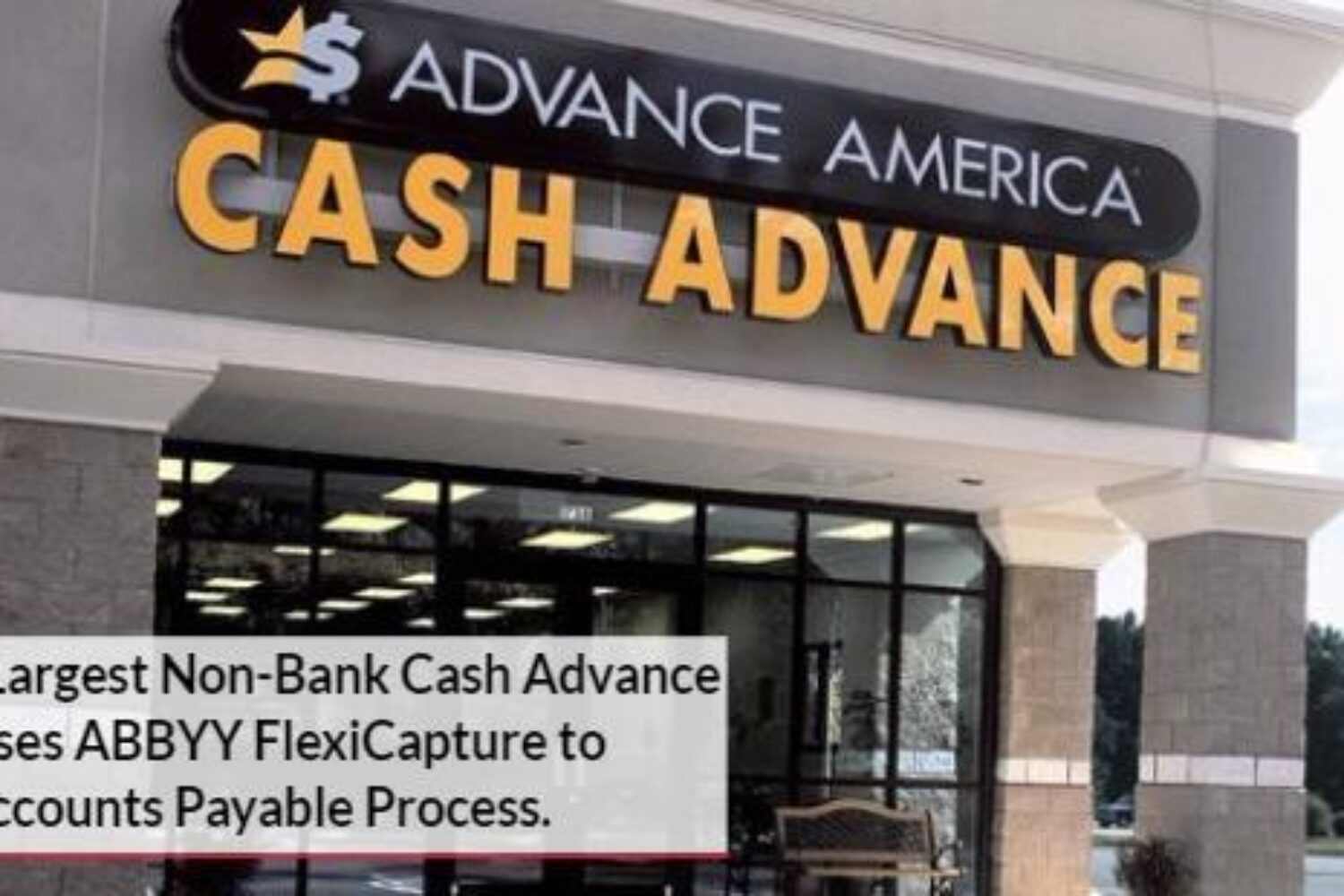 Advance America is one of the largest non-bank cash advance providers in the United States, and as part of its day to day business, processes on average 21,199 invoices a month. Always looking for ways to improve and streamline processes, Advance America decided to integrate ABBYY FlexiCapture for Invoices (ABBYY FCI) with their current solution to help streamline areas of their accounts payable process.

“It definitely has been a huge time saver. Even with the ones [invoices] that haven’t been fully mapped yet, it’s still faster than keying the invoices in by hand.”

Being the best financial solution for the past 20 years

Established in 1997 with just a few stores in the Southeast United States, Advance America has helped millions of Americans move forward and now has 2,102 stores in 28 states nationwide offering a variety of financial services. To find out more about Advance America and their services, click here.

Needing something more from current process

Maintaining and running the accounts payable process for a large network of over 2,000 stores nationwide involves an enormous amount of paperwork, from utilities (water, gas, electric, etc.) to day to day items (paper, toner, etc.). So much paperwork in fact, that Advance America averages 21,199 invoices a month from 9,548 different vendors. These invoices are separated into utility and non-utility categories, and follow the process outlined below:

This labor-intensive process consumed about 85% of each day of the company’s eight full time AP employees!

Knowing there could be a more streamlined process; Advance America went to work researching multiple invoice processing software before finally deciding to go with ABBYY FCI and User Friendly Consulting®, one of ABBYY’s tech partners, for the implementation process. “I found that a lot of the OCR/ICR software’s utilized ABBYY as a back engine and UFC® came up as a reseller for ABBYY with high marks”, recalls Glenn Grospitch, Director of Reconciliation and Accounts Payable.

According to Glenn, “Once the decision was made on the software and speaking to UFC® about our vision, I felt like UFC® was very knowledgeable and suggested some items we had not thought about. After the purchase of the software, we had multiple conference calls to assure we had as much information needed to setup the software and server for a smooth implementation. The initial implementation and testing went very well. During the setup and configuration of the system, this is where the knowledge that Phil [UFC’s consultant] had, even though we thought we were pretty automated, he actually had a few ideas to integrate into our current process and streamline it even more than we thought. Having a large variety of samples on hand for testing was key to finding out just how different each vendor may be and how many additional minor adjustments may be needed.  Taking the time and laying out exactly how and what we wanted the system to do, getting the system configured to accommodate our special way of processing, and testing a wide variety of invoices made the production environment much smoother. ”

After implementation of the software was finished, it was clear how ABBYY FCI streamlined the process for each of their invoice formats. Now the new process is:

Just with ABBYY FCI being able to “burn” the date on the invoices as opposed to hand stamping each one has been a huge time saver. “That [hand stamping] was a long process, because all you heard out there in the morning when the mail came was all the stampers going off!”, recalls Glenn.

Despite the initial reluctance among some of the AP staff, after ABBYY FCI was implemented “they absolutely love it”, says Glenn. “It’s user friendly and it was easy to train all of the associates. Visually from the split screen, where we have our conditions if you will on one side, the mapping, to showing the invoice on the other side; it’s very easy for the end user to just click and point and fill in all of the required fields”. Advance America has also been pleased with their choice in User Friendly Consulting®; not only with their help in the initial installation process, but the continued support and quick response as they continue their journey with ABBYY FCI. According to Neal (EDI Administrator), “As far as working with User Friendly Consulting®, it’s been great. With the support portal, I can put a question in there and have an answer back in usually 30 minutes”.

The number of invoices being processed hasn’t changed since implementing ABBYY FCI, however the overall time spent processing those invoices has reduced by over 38% and contributed to saving in personnel!  ABBYY FCI also helps save time by intelligently flagging issues such as outstanding balances sooner. According to Glenn, by doing this “…when it goes into EDI, it validates the information and processes a lot faster because the A/P associate is researching and fixing it on the front end instead of waiting until after it goes through the EDI process and it is kicked out, in what we call ‘recycle’, to be researched and fixed before it gets loaded into the financial system”.

Advance America is still in the process of fully implementing ABBYY FCI with all their vendors, but according to Glenn, “The potential is great”. With this in mind, he is also thinking of the potential future applications of ABBYY FCI, “With having a software driven background, I do see where we might be able to utilize this in some other areas throughout the company”.

View the testimonial in PDF format.

We are pleased to present articles from various authors at UFC, Inc. who write under the general UFC Webmaster identity. View all posts by UFC Document Capture Solutions